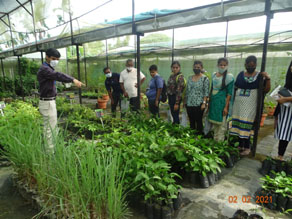 Port Blair, Feb 03: Women’s Cell of ICAR- Central Island Agricultural Research Institute (CIARI), Port Blair in collaboration with National Bank for Agriculture and Rural Development (NABARD) conducted a demonstration programme on Immunity boosting fruits and herbs for urban households on February 2, 2021. Dr. Pooja Bohra, Organizer of the event and In charge of Women’s Cell welcomed the gathering and briefed about the purpose for conducting the programme. The event was formally inaugurated by watering the plants of herbal spices signifying their contribution in fighting the pandemic across the globe.

Dr. Debasis Bhattacharya, Director (I/c) of the Institute, in his inaugural address highlighted the importance of immunity in fighting various ailments in general, and COVID-19, in particular. He appreciated this innovative effort to spread the awareness among island population. Dr. Pooja delivered a lecture on role and significance of including fruits and spices in our daily diet. Further, she emphasized on growing own produce by the urban and peri-urban households for improving the accessibility and affordability of the produce to the city dwellers.

The participants were then taken to the Institute demonstration unit on urban horticulture wherein different immunity boosting plants suitable for growing in urban spaces including balconies, terraces and backyard were showcased. Technologies developed by the institute viz. cultivation of Burmese coriander in pro-trays (CIARI-ProDhaniya) and multitier cultivation models were also explained to them. Dr. Ajit Waman, co-organizer of the event, elaborated about the possibility of developing small scale businesses in such limited spaces for promoting urban horticulture sector in the islands.

Participants visited the Horticultural Plants Propagation Unit of the institute wherein scientific methods for production of seeds and planting material of various fruits and spices were demonstrated. The event was attended by a heterogeneous group of eighteen participants including budding entrepreneurs, farmers, postgraduate students and employees of the institute. During the sessions, entrepreneurs showed keen interest in developing their own urban gardening units for commercial production. To kindle interest among the participants, planting material of passion fruit, long pepper, mango ginger and Burmese coriander were distributed.