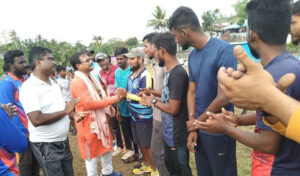 In total of 28 teams participated in the tournament and the winner of the tournament was Mansha-11 team who were felicitated by the Mr. Ajoy Bairagi, State President, Bharatiya Janata Party.

Mr. Ajoy Bairagi also addressed the gathering on the occasion. He congratulated the organisers of the tournament for organising such a fantastic tournament and he said that he is happy to see smiles on the faces of the young players. Mr. Ajoy Bairagi on the occasion also added that it is the first time since the onset of the COVID-19 pandemic that he is seeing genuine smiles on the faces of the youngsters. He further told the players to always keep playing and to keep themselves fit. He asked the organisers to explore more opportunities to organise such tournaments under the Khelo India Movement of Govt. of India.

He further asked all the players to participate in as much sports as possible as it is important for everyone to keep themselves fit and their mind healthy.