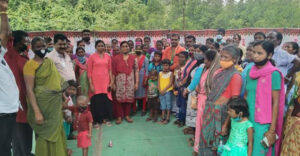 During their visit to Brookshabad the delegation visited all major residential areas and interacted with the general public and local leaders of Bharatiya Janata Party. The visiting delegation along with the local leaders also hoisted the flag of Bharatiya Janata Party at three places in Brookshabad. During the flag hoisting the general public as well as children were very enthusiastic. Sweets were also distributed to the children after the flag hoisting.

The residents also informed the visiting delegation about other dangerous trees in the region which are near streets and houses and Mr. Ajoy Bairagi assured that he will take up the issue with the Andaman and Nicobar Administration.