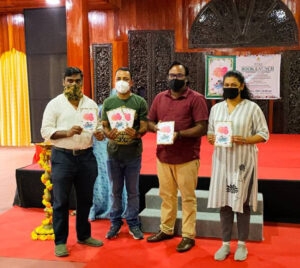 Port Blair, Jan 10: INTACH Andaman and Nicobar Chapter in association with Department of Art and Culture launched a book for children on the heritage of our islands. The inauguration was held at the Andaman Club, a historic building which is depicted in the book too.

The book has been authored by Samhita Veda Acharya, an Islander who has taught environmental studies in the Government college for 12 years, made documentaries on natural heritage, and is popularly known as Koyal in local circles. The book is titled “My little book on Andaman & Nicobar Islands” and has been designed by Roohani Sawhney, supported by Smti. Purnima Datt and Sanjoli Mathur from HECS, INTACH.

A tribute was paid to Late Mr. Samir Acharya, the former Convenor of INTACH A & N Chapter and Samhita’s father. Denis Giles, noted journalist of international repute who was mentored by Mr. Acharya in his early years was the Master of Ceremony and gave a very emotional homage to Mr. Acharya while mentioning many important achievements of  Mr. Acharya in the 1980s and played active role in several Environmental projects related to the islands.

Moving away from protocol, the INTACH chapter decided to get the inaugural launch done by the youth of the Andaman Avians Club as members of INTACH felt that the club members have been taking heritage conservation to the next level through their birding excursions and active participation in social media to spread awareness about avian species of our islands.

Samhita in her welcome address mentioned that the book was her dream and passion project and it took some time to find a publisher. She also said that the inspiration behind the book was the archives at INTACH A & N Chapter where she found an abundance of literature published during the 80s and 90s on heritage conservation and awareness. And that she felt that children of our islands should know what our heritage is.

Mr. Udhay Bhasker in his address mentioned that it was a welcome effort and this was the first step in  making the next generation aware and start getting educated about the need for conservation.

The vote of thanks was proposed by Mr. Farooq Alam.