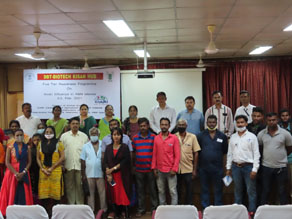 Port Blair, Feb 03: ICAR-Central Island Agricultural Research Institute in collaboration with Department of Animal Husbandry and Veterinary Services, A&N Administration initiated Five Tier Awareness on Avian Influenza on 03.02.201 at ICAR-CIARI, Port Blair under DBT-BIOTECH KISAN HUB. Dr. Sunita Roy, SVO informed that avian influenza has already spread in many states and has zoonotic importance. This deadly disease can be prevented through updates on awareness programmes. She informed that DAH&VS has taken steps to make poultry farmers and poultry entrepreneurs aware on biosecurity measures through trainings. Dr. D. Bhattacharya, Director (I/c) highlighted the zoonotic importance of avian influenza. He also mentioned that in the society among zoonotic diseases, bird flu has been given top priority to prevent and control. He also mentioned that field veterinarian,  poultry farmers, retail sellers are prone to avian influenza infection as they are directly exposed to the poultry. Hence, such type of awareness programme is very much apt in the pandemic situation. Dr.T.Sujatha, Sr.Scientist & Organizing Secretary, briefed that this five tier awareness is aimed to disseminate awareness among five categories viz., general public, retail sellers, poultry farmers, entrepreneurs and veterinary officers. She further added that consumption of cooked chicken meat and egg is safe. States and Union Territories have also been asked to increase surveillance around water bodies, live bird markets, zoos and poultry farms and strengthening of bio-security in poultry farms. A total of six senior veterinary officers, 30 participants including small poultry entrepreneurs and progressive farmers attended the programme.

Dr. Jai Sunder, Pr. Scientist presented in detail about the disease, its transmission, clinical signs, its potential to human infection, bio – security measure to be followed in the current pandemic situation, dos and don’ts  and action plan in case of outbreak of highly pathogenic avian influenza. He also narrated the role of Animal Husbandry Rapid Response team who are responsible for operations of culling, disposal, supervising and undertaking clean up and disinfection etc. He stressed that surveillance work has to be taken up on top priority basis and must continue to keep Andaman Islands free from Avian Influenza. Dr. Ramakrishna, SVO presented a visual media on avian influenza and informed that the cycle among poultry, pig and human contacts to be broken as it is danger in places where poultry and piggery are practiced together. As far as Andaman and Nicobar perspective, he said eggs and chicken can be transported from the non-infected states,. Islands are isolated and control programmaes have been implemented strictly by the Department of Animal Husbandry. He advised all the consumers, poultry keeper who handle poultry in day today life to go with mask and goggles to poultry shops. Dr. Sam Varghese, Veterinary officer from the Department of Environment & Forests, presented a perspective on wild birds’ role in avian influenza. He detailed on means of transmission and advised to inform to forestry department if any wild birds is found dead showing symptoms of bird flu. Dr. A. K, De, Scientist welcomed the gathering while Dr. P. Perumal proposed vote of thanks.