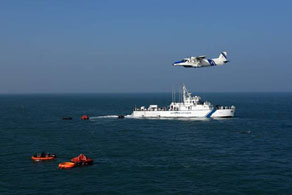 Port Blair, Jan 31: Indian Coast Guard is celebrating its 45th Raising Day on 01 Feb 2021. From a modest beginning with just 07 surface platforms in 1978, ICG has grown into a formidable force with 156 ships and 62 aircraft in its inventory and is likely to achieve targeted force levels of 200 surface platforms and 80 aircraft by 2025.

As the fourth largest Coast Guard in the world, Indian Coast Guard has played a significant role in securing the Indian Coasts and enforcing regulations within the Maritime Zones of India. True to its motto “Vayam Rakshamah” meaning “We Protect”, the service has to its credit saving over 10,000 lives and apprehending around 14,000 miscreants since inception in 1977. On an average, Coast Guard saves one precious life every second day at sea.

Despite the restrictions imposed by the ‘COVID-19’ pandemic, Indian Coast Guard has maintained 24×7 vigil in the Exclusive Economic Zone, by deploying about 50 ships and 12 aircraft daily. The deterrence at sea and coordinated air surveillance by the service enabled seizure of contraband worth about ₹ 1,500 Crore and apprehension of more than 10 foreign fishing boats with 80 miscreants illegally operating in the Indian EEZ alone in year 2020.  The ‘Preventive and Measured Response’ stance of operations introduced just over a year ago, ensured that more than 6,000 fishing boats with about 40,000 fishermen were escorted to safe harbours during the passage of 11 cyclones last year, thus averting loss of lives and property at sea.

In consonance with the Hon’ble PM’s vision of ‘SAGAR’ – Security And Growth of All in the Region, Indian Coast Guard created maritime history in dousing a raging fire onboard the 333 M long Very Large Crude Carrier Motor Tanker New Diamond with about 3 Lakh Metric Tonnes of crude oil off Sri Lanka, thereby averting a major ecological disaster.  Further, ICG also provided Pollution Response assistance to Mauritius during the grounding of Merchant Vessel Wakashio and provided 30 T of Pollution Response equipment in addition to training. ICG is also collaborating with littoral countries to combat transnational maritime crimes and enhance maritime safety in its area of responsibility and in the Indian Ocean Region.

To harmonise the Maritime & Civil Aviation Search & Rescue mechanism, ICG conducted National Maritime Search & Rescue Board meeting and followed it up with SAR Exercise-2020 (SAREX-2020) to validate the existing mechanism for undertaking Mass Rescue Operations. In order to synergise Coastal Security and intelligence, a maiden seminar was conducted to enhance the effectiveness of Intelligence sharing between stakeholders.  The service is also working in close coordination with Central and State agencies to put in place a robust Coastal Security mechanism.

The President of India, Vice President, Prime Minister and Defence Minister congratulated the Indian Coast Guard on completion of 44 glorious years of yeoman service to the nation and appreciated the remarkable role played by the service in pursuit of the nation’s interests in the Maritime Zones.

With a focus on operational excellence and quality, the ICG (A&N) has been performing a stellar role in maintaining vigil all along the vast A&N coastline of 1059 Nautical Miles having 836 islands, Exclusive Economic Zone (EEZ) of 6 lakh Sq Km and Search and Rescue Region of 9 lakh Sq Km.

The Indian Coast Guard Region (A&N) has to its credit saving of 23 lives at sea in the year gone by. In addition, the Hawk eye vigil by maintaining deterrent patrols 24×7 both at Sea and Air enabled ICG to apprehend more than 60 poachers and 05 foreign fishing boats illegally operating in Maritime Zones of these pristine Islands in year 2020. ICG (A&N) also undertook SAR of MV Kottai Ramaiah and provided assistance to MT Anastasia 1 in distress at sea and in the danger of running aground, thus safeguarding the delicate ecology of these islands.