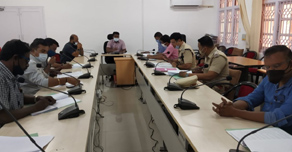 The Chatham Jetty area has been witnessing heavy vehicular congestion especially during the arrival and departure of boats, due to the unorganized movement of vehicles, heavy congestion is created in the area making unsafe for the movement of pedestrians.  As such it has been decided to implement a traffic movement plan initially for period of 30 days on a pilot basis which is as follows:-

This plan is being implemented on a pilot basis to ensure a safer traffic movement and hassle free pedestrian movement.