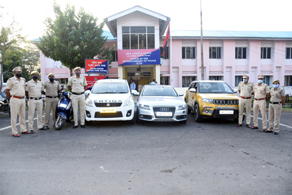 He was arrested on 22/10/2020 by Police Station Central Crime Station with 13.320 Kgs of Ganja. Md. Sultan has amassed huge wealth through his career of crime. During investigation by PS CCS the details of his illegally acquired properties were traced and identified.

The investigation resulted in a Seizing/Freezing Order by the Station House Officer, PS as regards to a land piece at Chouldhari, four vehicles and 4 bank accounts having significant deposits. Mohammed Sultan has been involved in 11 cases of drugs and other cases since 2008.

The order was confirmed by the Competent Authority and Administrator, Department of Revenue, Ministry of Finance, Govt. of India, resulting in freezing of his immovable property and seizure of his movable properties including four nos. of vehicles viz. a super luxury Audi A4, Maruti Vitara Brezza, Maruti Ertiga VDI and Suzuki Access Moped. The seizure and investigation was carried out under Sh. Jagdev Singh Yadav, DANIPS, Dy.SP (CID).

Andaman & Nicobar Police is committed to eradicate the menace of drugs from the Islands and to take strict legal action against drug peddlers including seizure and forfeiture of their illegitimate gains. The general public is requested to share any information related to drugs in the Island on the following numbers:233307, 232586, 100, & 9474290250 and/or through email at: spcid.and@nic.in The informer will be suitably rewarded and his/her identity will be kept secret.