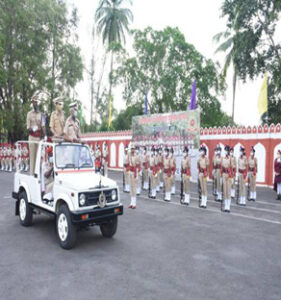 The Director General of Police, in his address conveyed his greetings to all serving and retired members of A&N Police. He lauded the services rendered by A&N Police in containing Covid-19 and walking the extra mile to support the community during the Covid-19 lockdown in the Islands. Highlighting the achievements of the force, he mentioned the technological upgradation in the traffic system, launch of schemes such as ‘Satark’, ‘Parakaram’, ‘Tourist Police’, setting up of women Help Desks, ‘Yuva’ Scheme and Police Student Cadet as part of initiatives towards public outreach and modernisation. Underscoring the challenges before Police Department Sh. Garg exhorted the staff to discharge their duties with utmost, dedication, professionalism, transparency, integrity and sensitivity.

The Police Week is celebrated from 16th January to 22nd January every year to mark hard work and dedication of the Police staff around the year in various duties. As part of the celebrations, various programs are organised including cultural activities, lectures, demonstrations and cleaning drives. Tomorrow, A&N Police will organise a Run for Nation, a panel discussion on women safety and a Motorcycle rally to honour COVID-19 warriers. The general public is invited to take part in the activities and make the Police Week celebrations a grand success.