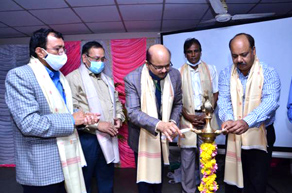 Port Blair, Jan 20: “The Labour Department, A&N Administration in association with the Dattopant Thengadi National Board for Workers Education and Development Eastern Zone (DTNBWED), Ministry of Labour &Employment, Govt of India has conducted 02 days “special programme for organized and unorganized sector workers” at Govt. Industrial Training Institute, Dollygunj, A&N Islands from 18th to 19th January, 2021 wherein altogether 120 unorganised workers as well as different trade union leaders were attended. This is first of its initiatives to such workshop on workers education programme conducted with the association of DTNBWED for education of working class in these Islands.

The inaugural session of the seminar was chaired by Shri Krishan Kumar, IAS,Secretary (Labour & Employment), A&N Administration as the Chief Guest in presence of Shri Atul Kumar Singh, Under Secretary, Ministry of Labour & Employment with Deputy Directors of the DTNBWED .In his inaugural address. Secretary (L&E) elucidated the importance of workers education and its impact on socio-economic development of our country. He briefed about the new Labour Codes and social security assistance being offered to the unorganised workers under various social security scheme such as BOCW welfare scheme, Pradhan Mantri Shram Yogi Manndhan (PM-SYM) Yojana, National Pension scheme for Traders (NPS-Traders), PMJJBY etc. He also stressed the need of awareness among the target audience and guided them to acquire information by using electronic media. He further invited the attention of the Commissioner Labour and other officers from the Department on the need for organizing similar programme for the benefit of unorganised workers to cover atleast 50% of the working population in the Islands. Speaking on the occasion, the Under Secretary, MoLE highlighted the detailed measures being undertaken to educate and trained the workers particularly in view of the new Labour Codes and aspect therein. He elaborated the efforts of the Govt.of India,in the field of workers education. The session for different issues was conducted by the experienced faculty of the DTNBWED alongwith the officers of the Labour Department, A&N Administration and the Asst.Labour Commissioner (Central) Sri Amritesh Kumar.

In 2nd day of the seminar the resource person from line departments like Health, ESI, EPF, Labour welfare and official of DTNBWED (eastern circle) have highlighted their expertise knowledge and shared with the audience of unorganised workers, trade union leaders, auto drivers and Anganwadi Workers.

The Secretary (L&W) took feedback at the concluding session and assured on demand to conduct such programme in future for the benefit of workers. The programme ended with Question and Answer season.