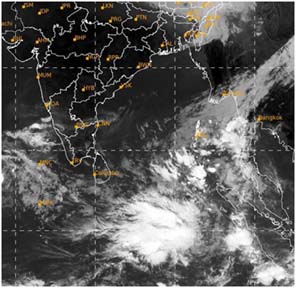 Port Blair, Mar 30: The Indian Coast Guard today issued caution for local residents and fishermen of Andaman and Nicobar Islands regarding formation of a low pressure area over Southeast Bay of Bengal.

Meanwhile, the Indian Coast Guard has also shared the weather information with civil administration including fisheries authorities and the Coast Guard Stations at various locations in A & N Region, in coordination with local fisheries authorities, are sensitizing the fishing community on persisting rough seas/inclement weather at sea and urging the fishermen to refrain from moving out to sea from 31 March onwards.

“The Coast Guard vessels on deployment are sensitizing fishermen at sea and guiding them to return harbour. All Coast Guard establishments and ships in A & N Region have been alerted and directed to maintain highest state of preparedness to meet any contingency,” the Coast Guard caution added.

Meanwhile various Islands of Andaman and Nicobar are already witnessing overcast sky and as per Indian Meteorological Department (IMD) thunderstorm with lightning accompanied by gusty wind with speed reaching 30 to 40 Kmph likely to occur at one or two places over Andaman & Nicobar Islands in next two days.