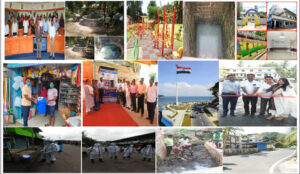 On behalf of all the elected representatives of Port Blair Municipal Council I, N.K.Udhaya Kumar, Chairperson PBMC extend my heartfelt gratitude to Shri Suneel Anchipaka, IAS towards his sincere and tireless work rendered to the Council as Secretary, PBMC. During the tenure he build an encouraging work environment with intensive creativity and excellence. His spirit and commitment towards public service is exemplary in meeting the aspirations of the Citizen’s.  Under his guidance and vision the Council has achieved many new heights. At this juncture I recall some the tireless work rendered by him in completion of the work related to Flag point at South Point and the efforts taken during the visit of the Hon’ble Vice President of India to these Emerald Islands.  All the welfare schemes of the Central Government were implemented properly. The Council under his able guidance has achieved many heights some of which are reflected below:-

As part of nationwide movement of Swachhata Hi Seva, 2019, PBMC has conducted many public awareness activities involving School, College, Market Area Banks and all stakeholders. Under the JAL SHAKTI ABHIYAN Scheme the Port Blair Municipal Council was nominated for the 2nd National Water Awards. Restoration of all the Japanese Wells was a major work. “Intensive Afforestation Drive” led by him was also a major step. Installation of Water ATM’s at various location of the Municipal Council was also a major achievement. The works taken under AMRUT (Centrally Sponsored Scheme) is a major achievement which was also accomplished in the stipulated time frame. Introduction and distribution of twin bin system to all the household and commercial establishment and introduction of door to door collection of waste from every household is also a noteworthy achievement. Further one of the notable achievements that the Port Blair Municipal Council has achieved the status of ODF in the year 2017. Since then as on date the Port Blair City has the status of ODF+.Under the Smart City project, the PBMC had installed LED Street lights in collabration with M/s EESL in the entire Municipal area. Various other projects under Smart city viz construction of Marine Esplanade, Integrated Command and Control Center (ICCC), has been approved and commencement of work will be taken up shortly. Further other major works under Smart city project are in pipeline for its final shape.  For the first time cloud space has been procured by any government organization in A & N Administration. Procurement of cloud space for migrating eNagarsewa software from SDC, NIC Uttar Pradesh to Megraj, cloud space for deployment of PBMC website and online building plan approval has been completed under his supervision.

I on behalf of Port Blair Municipal Council wish him to continue with these good works  in his new venture and wish him all the best for his  future endeavors.