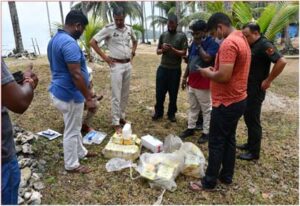 Port Blair, Apr 01 In the early hours of 31 March 2021, alert Army personnel of the Army Component deployed at Birchganj Military Station noticed a few suspicious packages that had washed ashore on the Nariyal Bageecha beach of Birchganj Military Station. On detecting the suspicious packages, the Army personnel promptly informed the local police who reached the site and confirmed the packages to be containing Methamphetamine, a banned drug.
A total of 31.2 kgs of Methamphetamine was recovered from the site by Police who seized the packages for further investigation. The Army personnel, with timely reporting, have facilitated this major drug haul, thereby contributing towards the fight against Narcotics in the islands