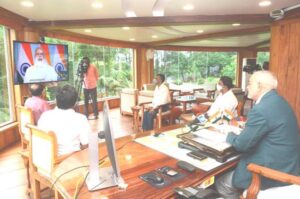 Port Blair, Aug 10: The Prime Minister of India, Mr. Narendra Modi today launched Chennai-Andaman and Nicobar Islands Submarine Cable Project and said that he considers it as an affectionate gift to A &N Islands.

This project and BSNL tariff plans will enable high speed internet access and associated services to the people of Andaman and Nicobar Islands.

The CANI project of connecting the Islands with Chennai by a submarine optical fiber cable of 2312 Kms under Sea is executed by Bharat Sanchar Nigam Limited (BSNL).

In his address after the launch, the Prime Minister said that besides enhancing national security, the project will improve internet connectivity in Andaman and Nicobar islands, enabling its citizens to use net banking, e-commerce, online education and telemedicine facilities.

He said higher data speeds will enhance tourism and attract tourists, thus more and more tourists will opt for longer stay in Andaman, which will benefit Andaman’s Tourism Industry.

He said the cable link will not only allow BSNL to provide 4G data services, but will enable other telecom operators to render such services on Andaman and Nicobar Islands, in coming days.

The long awaited Chennai-Andaman and Nicobar Islands Submarine Cable Project will connect seven islands of Andaman other than the capital city Port Blair. The seven Islands are Swaraj Dweep, Long Island, Rangat, Little Andaman, Kamorta, Car Nicobar and Great Nicobar. However he added that in the first phase only Port Blair, Swaraj Dweep and Little Andaman will get fast internet after launch.

“The project was not only huge in scale but was full of challenges. I am glad that, we have completed the work by a dedicated team. It was the duty and responsibility of the entire nation to provide telecom services to the hardworking people of one of the most important regions, Andaman and Nicobar Islands,” Modi said.

He said that it is the commitment of the Government to reduce the distance between heart and Delhi (Delhi sey and Dil sey).

The Prime Minister had himself laid the foundation stone of this project on 30 December, 2018, at Port Blair.