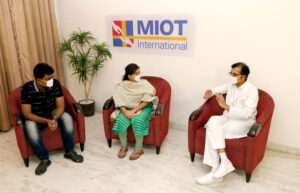 Port Blair, Aug 19: Mrs. Sowmiya, a 24-year-old Software Professional from Chennai had got married. But before her marriage, she had undergone 2 keyhole procedures which involved her reproductive organs.

She had been worried, and this was a shadow hanging over her regarding her ability to get pregnant. Imagine to her great happiness and surprise, within 8 months of getting married, she found out that she was pregnant. She and her husband, Mr. Sathish, were looking forward to starting a new, young family.

COVID-19 Brings Gloom In the 5th month of pregnancy, disaster struck – in terms of COVID-19 – and while her husband was negative, she became positive. After initially going to a hospital and then being told to quarantine at home, her condition worsened and she was rushed to a nearby hospital closer to home. There, they fought to treat her, but she continued to worsen.

Trust in the Best Having heard that MIOT Hospitals – Chennai was one of the 1st hospitals to start taking serious COVID-19 patients in large numbers and successfully treating 4500 people till date, Mrs. Sowmiya’s family decided to transfer her to MIOT. ON 19TH JULY 2020, Mrs. Sowmiya arrived at MIOT in a critical state, gasping for breath, her skin looked grey, her eyes were sunken, her pulse was feeble and her oxygen saturation – which in a normal human should be at least above 95% – was a mere 60%. Imposing Challenge The specialists at MIOT Hospitals, who had seen so many severe cases of COVID-19, were themselves shocked at Mrs. Sowmiya’s condition.

Upon arrival, she was immediately admitted to the ICU in the Separate Isolated Respiratory Block (MIOT’s dedicated facility for treating COVID-19), given high flow oxygen and various tests were conducted on her.

The critical care specialists started her on the drug, Remdesivir (current effective medication for COVID-19), even though they were unsure whether she was going to respond to it. But they had no other choice, because anything else would have been toxic to the unborn baby. Ultrasound scans taken by MIOT’s Senior Gynaecologists confirmed that the foetus was still alive.

The senior specialists who spearhead the multi-disciplinary team at MIOT, had to fight to try to save her, while at the same time, endeavouring to protect Mrs. Sowmiya’s precious baby. In a few days, the expectant mother’s condition continued to worsen, and they were left with no other option than to consider putting her on ventilator.

It is common knowledge across the world that even in the best centres, 30% of people put on the ventilator do not survive this treatment if they are infected with COVID-19. And here was a young, expectant, newly-married mother battling for her life.

The Dilemma with an Ultrasound showing the foetus was still alive, the doctors were faced with the dilemma of either allowing the mother to die or put her on the ventilator, which would put her and the newly detected baby who was growing inside her stomach at risk. The multidisciplinary team at MIOT Hospitals, known for never giving up, decided to give Mrs. Sowmiya a chance as they knew that she would not survive without ventilator support.

Mrs. Sowmiya went on to the ventilator and continued to worsen. Her temperature continued to increase. Appropriate antibiotics based on the cultures (blood test to find germs) grown from her blood were started. She continued to be on the ventilator on Day 3. Ray of Hope On Day 4, Mrs. Sowmiya seemed to show improvement. Gradually, she started breathing half on her own and half on the ventilator. Finally, she was able to slowly breathe on her own with the tube simply there as a safety measure. Back to Square One However, when the doctors examined her, she was not able to respond appropriately.

And when it looked like her muscles were weak, the doctors were shocked, thinking that maybe COVID-19 had affected her brain. They immediately got the Senior Neurologist’s opinion. They found that the expectant mother may have had an inflammation of the brain and may need immunoglobulins. It was difficult with her being dependent so much on oxygen and also with the baby still being alive on Ultrasound for her to have any kind of brain scan that was both safe for her in this condition and safe for the baby.

Never Give Up They decided to give it another day. Slowly, Mrs. Sowmiya was able to come off the ventilator. The doctors procured the precious immunoglobulins and kept them on standby. Miraculously, in 24 hours, Mrs. Sowmiya’s muscle power improved. She was able to sit out. Eventually, she was able to walk and she went to her own room.

The Better Half makes her Better Her devoted husband, Mr. Sathish, who continued to be COVID-negative came and sat next to her, lay down next to her and looked after her and nursed her back to health. Every single day, Mrs. Sowmiya’s abdomen was scanned and the foetus was found to be alive. ON 4TH AUGUST 2020 (AFTER 16 DAYS OF CARE), Mrs. Sowmiya was discharged.

She is now ready to be a new mother in 4 months-time. MIOT’s Multidisciplinary Approach Having already delivered babies from COVID-positive mothers during the pandemic, the expertise of MIOT’s full-time multidisciplinary team (critical care specialists, senior pulmonologists, neurologists, cardiologists, gynaecologists and haematologists) in complicated situations is unparalleled. They pooled in their experience and expertise, and provided the best possible treatment under the circumstances to save both Mrs. Sowmiya and her unborn baby. While the multidisciplinary team attended to her, the compassionate non-medical staff at MIOT Hospitals provided moral support and words of comfort to her family, assuring them that Mrs. Sowmiya and her unborn baby were in the best hands.