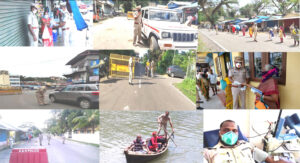 Port Blair, Aug 19: The threats and challenges posed by the COVID-19 pandemic had prompted the UT Administration to enforce the various directives necessary to control the outbreak under the guidance of the Central Government. The role of police alongwith the health workers and sanitation workers has been universally acclaimed and these departments have been termed as “Corona Warriors” by a grateful populace all over the world.

Andaman &Nicobar Police has also played a vital role in the Administration’s response to COVID-19 pandemic. A&N police personnel had put their best foot forward and have gone beyond the call of duty in controlling this deadly virus. This mammoth task was achieved by our relatively small force by optimally utilising all available resources.

From the initial days itself, the Police department had formulated and adopted a two-pronged strategy of “enforcement” and “awareness”. Beyond the mandate of police, a third dimension of “assistance” was also introduced in emergent situations to provide aid to community, specially in remote localities and to augment the efforts of other departments.

As a law enforcement agency, one of the main duties of A&N Police was to ensure that the National Directives for COVID-19 Management and orders/directions issued by the Government of India and the A&N Administration are enforced in letter and spirit. To ensure this, A&N Police has taken a number of proactive and effective measures like barricade checkings, traffic checkpoints, pickets in vulnerable areas, foot patrolling, mobile patrolling by PCR vans, Parakram vans, motorcyles including Satark motorcycles, deployment in markets etc. Stringent action under Indian Penal Code and Disaster Management Act, 2005 has been taken against the violators of these orders/guidelines. Till 18th August, 2020, a total of 299 FIR have been registered in which 392 persons have been arrested so far. As many as 1,847 vehicles have been seized and around 21,227 violators have been challaned for various violations resulting in a recovery of fine to the tune of Rs. 86.71 lakh.

Realising that public awareness and resultant cooperation is the biggest ally in this fight against the COVID pandemic, Andaman & Nicobar Police has initiated several measures to disseminate messages of public health and safety among the masses. All means of communication, traditional as well as digital and social media, are being used to spread mass public awareness about care and precautions against transmission of COVID-19. Painstaking efforts are being made to reach out to each and every resident through face-to-face personal meetings, door-to-door dissemination, public announcements through vehicle-mounted public address (PA) systems, special interactive programme on All India Radio and Doordarshan, campaign on social media through official page/handle on FaceBook, Twitter, YouTube, WhatsApp etc. Most notably, many songs were composed to catch the imagination of public at large and to spread the awareness regarding anti-COVID measures through these songs.

In emergent situations, especially in remote localities and islands, Police Department went a step further and work as social service provider to help the community. A&N Police took initiative to provide food, ration items, medicines, drinking water, face masks, medicines and hand sanitizers to the needy in different Islands to the extent possible. Police vehicles including police trucks and buses were provided to help the sick, the elderly and the needy.

PHOTOGRAPHS OF RATION SUPPLY BY POLICEMEN

The other major concern of the Administration and the Police Department has been to shield and protect the indigenous tribes from the pandemic. The prime aim is to prevent any kind of contact of outsiders with the vulnerable primitive tribes. Intensive foot and sea patrolling have been taken by the Police in association with the AAJVS volunteers and Forest Department in and around the areas inhabited by these tribes to keep the outsider away from their habitat. Awareness programmes in villages close to these reserves are also being regularly carried out. The convoy moment on ATR has been restricted and Intensive screening of driver/passengers is being carried out including covid test before allowing journey.

However, this fight against COVID-19 had not been without its perils. A large number of police personnel, including the Director General of Police and many senior police officers have contacted the infectious disease. Till 18th August, 2020, as many as 397 police personnel have tested Covid-positive out of which, 353 continue to be infected.  In addition, a total of 404 police personnel are either under home quarantine or self-isolation.

However, this has not dampened the resolve of the Police department even one bit. The endeavour and action on the part of Police department continues unabated despite the depletion of available manpower. All the police personnel are being provided with the necessary guidance and support to tide over this pandemic and come back stronger to serve the community even better. Apart from regular awareness briefing to the police staff, the offices & units are being regularly sanitized to keep the Police Department operational 24×7.

While each and every member of the A&NI Police has worked with utmost dedication and sense of service, there were a few instances where the work and conduct of the concerned officer was extremely exemplary. A few of these officers are:

On 22/04/2020, a girl living in remote village of Dhani Nallah and whose father is a cancer patient, made a distress call to OP Betapur to evacuate her father whose condition had worsened. Travel through sea route was the only option but due to lockdown no means was available. In an act of great resolve and humaneness, SI Sushanto Debnath with constable Abdul Shahid decided to evacuate the patient in a wooden dinghy which he rowed himself. This timely decision and his extraordinary efforts to evacuate the critical patient to the hospital saved the life of the patient. His outstanding feat and kindness were highly appreciated by the local residents and the doctors.

In another incident, Sub–Inspector Sushanto Debnath displayed an outstanding humane effort by carrying a dead body of a poor villager of Panchawati on his own shoulders and handed it over to the decedent’s family.

2)            Shri Sambhu Murthy, Police Constable not only donated his half month salary of Rs 21, 835/- towards LG Relief Fund, Andaman & Nicobar Islands but also donated blood to a pregnant lady who was admitted at G.B Pant Hospital.

One day, while performing patrolling duty, when he noticed that one family had no food items, he provided them with some money as well as ration articles. He also regularly distributed ration articles to the needy people of his locality during the lockdown.

There are numerous stories where the police personnel had gone beyond their regular task to help people in distress by distributing food, milk and ration packets to those in distress, including senior citizens, tribal people, specially-abled and orphan children.

The A&N Police would like to make a fervent appeal to all the members of public to cooperate with police officers on duty and exercise self-disciple to follow the various directives and orders issued by the Administration, maintain social/physical distancing, use face mask, wash hands regularly and not step out of their homes during lockdown on weekends until there is an absolute emergency.

All the citizens of the UT must also connect with A&N Police by following its official Twitter handle @AndamanPolice, Facebook page (PoliceAndamanNicobar) and YouTube Channel. All constructive suggestions and interactions are most welcome on all these social media platforms. A&N police can also be reached on 112 in case of any emergency.