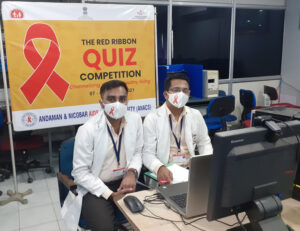 It was a neck to neck competition and Andaman team got the second position next to Pondicherry. Points scored by each state teams were Puducherry – 65, Andaman and Nicobar Islands – 60, Andhra Pradesh – 40, Kerala – 35, Tamil Nadu – 20, Karnataka – 10, Odisha – 5, Telangana – 5.

Earlier a State Level Quiz competition was organized by ANACS for the Youth of A & N Island on 10th and 11th November 2020 in which Mr. K. Dilleswar Rao & Mr. Nikhil R. Nair of ANIIMS won the First Prize, Ms. C.M Shahanaaz of MazaarPahad & Ms. Sherin Mustafa of Atlanta Point bagged the Second prize and Ankit Das of Junglighat & Ankit Toppo of Prothrapur won the Third prize.

Altogether 74 teams had participated in A & N Islands State level quiz competition and in the elimination round out of which 5 teams were selected for the Final Round.

The objective of organizing this competition was to provide platform to exchange information on issues associated with HIV & AIDS, taboos and myths and to channelize the power of our youth in positive direction and assess the level of IEC in the territories which is matching with the national level.

This sort of competitions will go a long way in ensuring the messages for control of HIV / AIDS to percolate down to the masses in general.