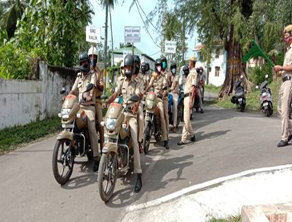 Port Blair, Jan 18: As part of our Raising Week celebrations, a bike rally was organised in which Police staff, village heads and local populace participated in large number. The objective of bike rally was to spread awareness about traffic rules, POCSO Act and ill effects of alcohol and drugs. At Campbell Bay the students of GSSS Vijay Nagar visited the local PS and they were briefed about functioning of PS and role of Police in building Crime free society. Car Nicobar Police has also conducted “Swachh Bharat Abhiyaan” at Malacca Beach and plastic waste was removed by police staff as part of our responsibility towards protecting the pristine environment of these Islands. At Teressa also, 2k/5k races were organised to mark the Raising Week celebrations.