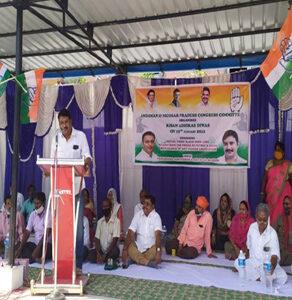 Port Blair, Jan 17:  On the directives of All India Congress Committee, the Pradesh Congress Committees throughout the nation  organised ” “Kisan Adhikar Divas” to express solidarity with the farmers in their ongoing stuggle to convince Central Government to repeal the recently introduced Farm laws. In Andaman and Nicobar Islands too, the Pradesh Congress Committee under the leadership of its President Mr. Kuldeep Rai Sharma observed ‘Kisan Adhikar Divas’ by organising a dhana at Ferrargunj junction from 9AM to 12 Noon on 15.01.2021 against farm laws and continuously increasing fuel prices. The dharna was attended by the leaders of Congress party, the general public and large number of farmers residing in the locality of Ferrargunj tehsil.

Addressing the gathering Mr. Sharma said that the three pieces of legislation—the Farmers Produce Trade and Commerce (Promotion and Facilitation) Bill, the Farmers (Empowerment and Protection) Agreement on Price Assurance and Farm Services Bill, and the Essential Commodities (Amendment) Bill was all passed hurriedly by the BJP lead NDA government in the Parliament and presidential assent on these three farm bills was obtained September 28 last year. He said these three controversial Bills are primarily intended to deregulate the sale of agricultural produce by doing away with the Central Government providing Minimum Support Prices (MSP) for nearly two dozens essential farm produce, legalising contract farming and liberalising stock limit norms leading to large scale hoardings by the rich businessmen and industrialists. Mr. Sharma alleged that absence of legal guarantee in the form of minimum support price (MSP) based procurement by Agricultural Produce Marketing Committees (APMCs) will cause farmers to sell their produce at much cheaper rate at will of big industrialists and business houses who prime objective is only making money. Addressing the gathering, the President, PCC said that in the month of  October-November, 2020. the Congress-ruled governments of Punjab, Chhattisgarh and Rajasthan drafted and legislated their own farm Bills on the grounds that the Central laws not only were against farmers’ interests but in  violation of federal principles since Agriculture being a State subject under the Constitution.

Mr. Sharma said that it is for these reasons, the Congress high command has decided to observe ‘Kisan Adhikar Divas’ across the country to protest against the ‘anti- farmers’ policies of the BJP-led State and Central Government and to highlight the problems of the farming community.

Addressing the gathering on the issue of continued hike in the fuel prices, even though the cost of crude oil in the international market becoming low is one of the most worrying factor for the common as he already subjected to price rise in essential commodities and things of day to day use. He said particularly the steep rise in the price of Diesel oil which has become comparable to Petrol most unfortunate as it leads to  increase in cost of transportation which ultimately increases the cost of goods to the consumers.

The PCC President said that for the farmers  sharp increase in diesel price is seen pushing up cultivation costs Now with farm operations such as tilling, sowing, spraying and harvesting becoming  mechanised and irrigation dependent, farmers are feeling the heat of fuel price rise more. He said the BJP lead Central Government instead of passing on the benefits of low crude prices to the people, particularly the farmers, it is making living of more difficult by leving enormous taxes and duties.

Mr. Sharma said when at each level, our agriculture is heavily consuming diesel fuel , so the commitment of BJP  government to double the farmers’ income by 2022 appears to be a distant dream when farmers’ basic need of  negated and confronted in varous fronts. PCC President asserted that the Congress Party will keep fighting until the Centre repeals these three farm laws and will always stand with the poor, downtrodden and common people for their legitimate right of ease of living.

Speaking on the occasion other  protesters alleged that under the BJP, more anti-people, anti-farmer, and anti-labour policies were being implemented causing hardships to the people, snatching away employment and pushing them to the streets.