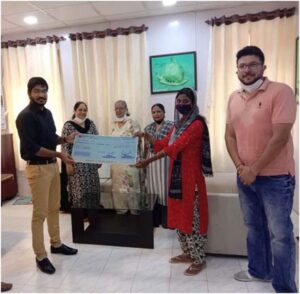 Port Blair, Apr 05: A lady named Mrs. Anisa Bibi residing at Rangachang, having two very young kids had approached Mr. Mandeep Grewal, President, Port Blair Guru Ki Rasoi, to arrange a livelihood for her.
According to her, she is not getting any support from anyone, including her in-laws, but she is ready to work no matter how hard it gets.
She had plans to open a small poultry farm in front of her hut at Rangachang for which she needed financial assistance.
Responding to her needs, the PBGKR team immediately sponsored her with a cheque of Rs 25,000/-. The cheque was handed over to Mrs. Anisa Bibi by Mr. Hari Kallikkat, SDM , South Andaman.
Mrs. Raj Khokher, Vice President, PBGKR along with Mrs. Satveer Kaur, Treasurer handed over a token of appreciation to Mr. Hari Kallikat for tirelessly working for the people of South Andaman. Mr. Mandeep Grewal appeals to all Islanders to come forward and help the people, who actually needs help.